Just call me Dopey: The Expo and 5k

It's hard to explain the emotional roller coaster of the 4 day Disney Dopey Challenge.  The words will not do it justice.  As someone said the night before the last race, the marathon, "A goal is not about what you get in the end, it's about the person you become trying to achieve it".

Anyone who has been to a race expo knows the excitement and frustration that it can bring!  Disney didn't disappoint on either front.  I had to visit 7 different locations to collect everything from bibs to race shirts.  Honestly I could have cut off 2 stops had I not ordered the race retreat (more on this later but soooo worth it) and the commemorative items which were the longest lines!  After about an hour, I was set to go....1 bracelet, 2 bibs, 5 Disney pins, and 6 AWESOME shirts! How shocking right? To LOVE all 6 shirts?  I felt like I had already won; imagine how I would feel when I got the medals.

After all the running around I finally met up with my boys who walked the remainder of the expo with me.  My hubby 'happily' shelled out $300 for a commemorative race frame.  When I protested and said it was "braggy", he told me 48.6 miles is worth bragging about.  So true!  At this point we decided to head back to the hotel and let the credit cards cool off, when I spotted them....a red and white polka dot, Minnie themed pair of compression socks.  I have never worn compression socks but decided it might be fun to give them a try for recovery.  So began my love affair with compression socks! If you don't have them...you need them!!!

It all began in the early hours of Thursday AM, standing at the start line of the 5k with my 11 year old son, Chase.  I took it all in, amazed that I had completed this journey...I was at the start line HEALTHY! In 22 weeks of training, my IT band and Plantar Fascial issues that had plagued me in the past didn't even become a factor (thanks EPAT). I did get my first black toenail, but I will happily take it.

Experiencing the Disney Family Fun Run 5k through my son's eyes was honestly the greatest race of my life! It doesn't get any better then when he looked up at me and said "This is the most fun I have ever had running".  The fireworks illuminated the sky and we were off...48.6 miles here I come! 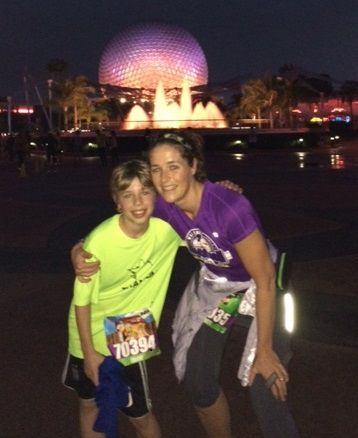 We stopped and took a picture at Spaceship Earth, he ran across the "stars" in the sidewalk until they all lit up and after crossing the finish line there were big high 5's and even a HUG! We grabbed our Pluto medals and managed the crowds to grab my Dopey wristband (had to collect one for each race to claim your Dopey medal...no cheating in Disney!). So much fun to see him enjoy discovering what the post race goody box held...skittles before 7 am might have just been his race highlight!

Headed the bus back to the resort and crashed for a few more hours sleep...rest up Dopey...45.5 miles to go!